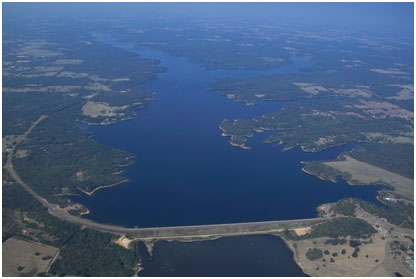 That story begins in 1964. Texas was consumed with one of its infamous, periodic droughts. One can imagine how especially troublesome and catastrophic a severe drought must have been for a little farming and dairy community like Franklin County in 1964. That drought put the idea of a lake into the minds of some Franklin County leaders - there is no evidence whatsoever that the people in Franklin County gave any thought then to the tax or commercial advantages that would result from establishing a large lake.

As the drought continued Mt. Vernon was running out of water. The political leadership of both the Mt. Vernon City Council and the Franklin County Commissioners began to discuss the possibility of creating a large lake somewhere within the county. The minutes of the Franklin County Commissioners Court (April 23, 1964) reflect that then County Judge Neil Duval entered into a contract with an engineering firm in Texarkana to study four possible dam sites for a lake. In December, 1964 the Commissioners met with a Dallas law firm to discuss the legal process necessary to create a large lake. The lawyers advised that a water district would be needed, and only a special act of the Texas Legislature could create a water district. Water districts have the power to condemn the land necessary for the lake and the water districts have the power to issue the bonds necessary to pay for land condemnation and construction of the lake itself. Before the water district could issue those bonds, the voters who lived within the boundaries of the water district, i.e. the citizens of Franklin County would have to approve. In the spring of 1965, the effort to create the necessary water district began in earnest. The first formal meetings to consider the feasibility of a lake and water district were in March of that year. The story of what transpired thereafter is best told from the headlines of the Mt. Vernon Optic Herald.

September 9, 1965
"Water District Bonds Receive Approval by Very Small Margin" ... voters turned out in record numbers to cast their ballots on the issue which became hotly contested within the 10 days previous to the balloting." ... the final vote was 598 for and 570 against ... Mt. Vernon and Winnsboro boxes were for and Hagansport and S. Franklin County boxes were against."

It took only six months for the leaders of Franklin County to accomplish all of the steps necessary for this massive project! The lake today and the benefits it bestows on Franklin County is an elegant memorial to the foresight and enthusiasm of those Franklin County citizens who led the effort and triumphed over considerable opposition. DEVELOPMENT BEGINS ON LAKE CYPRESS SPRINGS

It took eight years to complete Lake Cypress Springs (bond approval 1965 - lake finished filling in 1973). There was much to be done, some of which is outlined below.

What was to be the lake bed was very densely forested. At that point in time it was not economic to harvest the timber, so large bulldozers were used to scrape the timber into giant mounds to be burned on site. Franklin County residents recall how, as teenagers, they spent evenings at the construction site watching the glow of the huge bonfires of burning timbers. Clear cutting the lake floor contributes to the water clarity that we see today. The new lake would inundate part of Highway 115 and in November of 1968 the County Commissioners agreed to a new bridge that would provide a crossing for a re-routed Highway 115.

Condemnation of the land that would comprise the water table of Lake Cypress Springs had to be completed. That process generated the usual haggling over fair price between owners of land to be condemned and the water district. But the controversy was broader than that. By the time condemnation started, the Water District realized that the projected revenue from water sales would not be sufficient to make the payments on the bonds that had been issued.

To solve what appeared to be a resulting financial crisis, the Water District sought to condemn not only the water table for the lake but a sizeable portion of land behind the planned shoreline of the lake. It was the intention of the Water District to generate revenue by exploiting the commercial potential of this water front-to-be property. A suit to block the condemnation of land above the water table was brought by a landowner. The landowner won the case on the grounds that the power of condemnation is limited to land that will be put to public (not private) use.

Development of the lake shore began before the lake filled in 1973. In 1971 the first development on the lake, Snug Harbor Estates, was established by Milton Kelly. In 1973 land for Mary King Park was donated by the Solon King family. THE GENESIS OF PINE VALLEY AND THE PROPERTY OWNERS ASSOCIATION

The 1992 annual owners' meeting was held on July 9, 1992 at the Holiday Inn in
Greenville, Texas. The minutes of that meeting reflect that: "Some members expressed the intention of meeting with Mike Ward, the President of the Association, to discuss the management of the POA." The members referenced in those minutes were Dana Austin, Jack Mason, Jerry Pursell, and Kurt Twining. Mr. Ward made it clear that Double Diamond would no longer service the POA and that the owners would have to take it over. By the end of 1992 the documents necessary to transfer ownership of the POA land and improvements from Double Diamond to the POA were complete.

On February 4, 1993 a Pine Valley POA account was opened at the First National Bank of Mt. Vernon with money borrowed from the bank, using some of the POA land as collateral. The Pine Valley POA had finally become a genuine POA. The first Board of Directors of the newly constituted POA were Dana Austin, President; C.P. Wright, Vice President, Jack Mason, Director; Roy Paulson, Director and Kurt Twining, Director. The POA had no money and the development was generally run down. Within one year these first directors had established a set of accounts with a cash flow; collected delinquent dues through personal phone calls to owners; assessed owners for a road improvement fund and bought a used security vehicle.

The real Pine Valley was born.